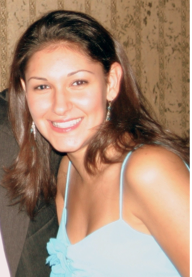 Lyndsey began seeing a new OB/GYN with the chief complaint of severe cramping. Until that time, she’d suffered that way since her teens. Now, at 27, she was given a diagnosis of endometriosis and was told the only way to remedy the situation would be surgery. Short of that, the doctor said if she’d use NuvaRing, it would relieve her pain. The physician also stated that “it was a miracle she ever had Dominic”, due to the severity of the endometriosis.

Lyndsey used the NuvaRing for one full prescription and after the start of the second NuvaRing; she began suffering extremely painful headaches.

While celebrating Father’s Day, June 15, 2008, she commented she’d been having headaches everyday. She was in contact with her primary care physician, who prescribed pain relievers that weren’t helping and by Thursday of that week, told her to just use Excedrin/Migraine. Lyndsey looked totally exhausted, took the Excedrin and tucked Dominic into bed.

At 3 a.m., I was awakened by her call, asking me to stay with Dominic while she drove herself to the E.R., as instructed by “nurse on call”. By 5 a.m., the hospital called saying they diagnosed an aneurism and were life-flighting Lyndsey to the Cleveland Clinic.

Cleveland Clinic’s MRI found hemorrhaging on her brain, not an aneurism. I realized what high pain tolerance she had…a single mom, raising her son, never missing a day’s work and suffering for at least a week with what she believed to be migraines…all the while, it was bleeding on her brain.

The surgeons working on Lyndsey would come out from time to time with updates as they continued working an all day surgery to save her life. We were warned that she probably wouldn’t make it. Everyone prayed and three weeks later, she was released to rehab.

Within a day, Lyndsey was back at Cleveland Clinic after the spinal fluid drained from the incision in her head. They discovered an infection. One that was acquired from her time at Cleveland Clinic…in all, 7 months. She would lie in bed focused on a picture of Dominic with tears running from her eyes.

The infection would be treated time and again. The doctors said there was nothing more that could be done for her. We were given a choice to leave her that way to die, stitch up the incision and let her die or fill her with antibiotics to last several days and then, let her die.

We brought her to Hospice. She opened her eyes for the last time, looked at Dominic and smiled. It was a smile we hadn’t seen in months. Dominic snuggled next to Lyndsey on her pillow. It was the first time he smiled throughout 7 months of visits with her. He hadn’t been allowed to touch his mother, have skin-to-skin contact and had to be fully gloved and gowned when seeing her at Cleveland Clinic due to risk of infection.

My husband and I suffered the same way. Never able to hold Lyndsey in our arms. Our only child. We watched her die a slow death on January 18, 2009 after 12 days in hospice.

We are raising Dominic the way Lyndsey wanted after a five and one-half year legal dispute with his father, who relinquished custody this year.

The Bottom Line or Public Health

Tactics Corporations Use to Influence Health and Health Policy, and What We Can Do to Counter Them