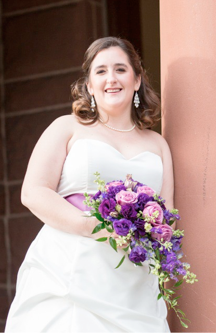 This was the quote at the end of every email sent by our daughter Julia, a motto she lived by since she was an undergraduate student.

Julia lived in Southern California after completing an M.A. in Economics and had gotten married just five weeks before to her sweetheart Eric. She was so happy and we were all so very happy for her. I talked with Julia on Tuesday night and all was well. She and Eric were so excited, as they were to leave for their delayed honeymoon that weekend. Nothing seemed wrong. Then on Thursday night I got a phone call from Eric that Julia was in the ER.

Eric told me that Julia had been feeling a little tired, and that as she walked to her car on Wednesday night she experienced a moment of tunnel vision. At home she climbed in bed to rest, as she wasn’t feeling well.

At Urgent Care they saw she was in respiratory distress. We read later in her records that she told them she felt “a sense of impending doom.,” and that the doctor removed a NuvaRing. They intubated her and sent her to Emergency.

Eric called again later that Thursday night to tell us the doctors wanted to put Julia in the ICU. He also said the doctors said her kidneys weren’t functioning and they wanted to put her on dialysis. This was more than a standard emergency room visit.

The ICU? We didn’t know what to think. Alarmed and not understanding what was happening, we flew down to be with our daughter.

We arrived at the hospital on Friday morning, saw Julia briefly, and the nurse sent us to the waiting room. Around 1 p.m. the ICU doctor came to tell us that they thought Julia had septic shock and they had put her on a sepsis protocol, giving her antibiotics and antifungals to treat any infection. The ICU doctor assured us that Julia would recover, saying, “Julia is young and strong.” The doctor told us Julia would be in the ICU for a few days and moved to another floor to recover for a week or more. The doctor sounded confident, but we were still anxious and just wanted to be with our daughter. We were told we needed to wait a while longer to see her again as they were setting up some equipment.

An hour later, a nurse ran into the waiting room, and yelling, “West family, we need you NOW!” and rushed us down the hall to Julia’s room. The ICU team was frantically doing CPR, resuscitating Julia, who was in cardiac arrest. We huddled together in shock as we watched our young daughter have a heart attack.

Although the ICU team stabilized Julia, her heart stopped again. Again we watched them perform CPR. We stood outside Julia’s ICU room, with disbelief and ever-growing dread, as our daughter’s heart repeatedly failed and the ICU team kept up their heroic lifesaving efforts to resuscitate her, over and over again. After over four hours of repeated CPR, we were told that Julia’s chances of being severely brain-damaged were 95% because her blood was so very thin and she’d had so little oxygen to her brain.

We felt we had no option but to stop the resuscitation efforts and let her go. We believed she wouldn’t have wanted to live a diminished life, even if they could have saved her.

We had been told that Julia had septic shock, but we couldn’t understand what had happened. We requested an autopsy, as did the hospital. We also ordered Julia’s hospital records.

We received the autopsy report and learned that Julia died from massive bilateral pulmonary embolisms. The autopsy also showed she had a deep vein thrombosis (DVT) in her left leg.

The blood clots in her lungs were so massive that no amount of resuscitation could have brought her back due to all the clots and blockages in her body.

None of this made sense to us. We wanted to know why our daughter developed pulmonary embolisms and a DVT. We wanted answers.

We discovered Julia was using the NuvaRing and began reading about the increased risk of pulmonary embolisms and deep vein thrombosis.

We contacted the ICU doctor, sent her the autopsy and asked questions, lots of them. She told us they had not known Julia had pulmonary embolisms when she died. The doctor, who worked so hard to save Julia, was not familiar with the NuvaRing birth control, it’s risks, signs and symptoms. She also told us that the hospital would do a formal review of Julia’s case with a team of doctors.

The hospital reviewed everything that happened from Julia’s admission, her treatment and her death. When we spoke to the ICU doctor again after the review, she explained that they had checked for pulmonary embolisms on admission and for a DVT. The doctor said a PE might have been brewing, and she told us that Julia’s blood developed disseminated intravascular coagulation (DIC) where her body tried to regulate the clotting. In this process Julia’s blood had become so thin that trying to surgically treat a pulmonary embolisms, would have caused Julia to bleed to death. No infection was ever found.

The ICU doctor also told us, “We do not see someone as young and healthy as Julia develop such massive pulmonary embolisms unless there is an underlying factor… and that is hormonal birth control.” The ICU doctor said she and other doctors on the team “personally believe the NuvaRing caused Julia’s blood to clot and develop DIC as quickly and as much as it did.”

Julia had been using NuvaRing for two years.

We believe the hospital did everything they could to try to save our daughter’s life. We truly thank them for all their efforts.

Our family will never be the same. Julia, a cherished daughter, sister and wife, was young, healthy, loving, vibrant and a bright young woman.   She had a whole lifetime ahead of her.

Julia had confidently used NuvaRing because it had been prescribed confidently to her. We are sharing Julia’s story with our deepest hope that this won’t ever happen to any woman you love.

Have Bear Will Travel

She had to break, so I could shine

The Bottom Line or Public Health

Tactics Corporations Use to Influence Health and Health Policy, and What We Can Do to Counter Them